Stratagem Trade's Practical Option Tactics class is an educational platform designed to assist in taking the novice/average investor and making them into super traders. Not all trades are winners but with the right education, one can reduce their losing trades, increase the amount of winning trades and reduce risk substantially.

Over the years Scott has demonstrated strategies in a paper trading account to illustrate how certain strategies perform. Instead of back testing trades that can have the trader inadvertently and unintentionally lie to himself, paper trades are as close to real trading as one can get while staying in the guidelines of US law and have the safety of possibly losing money.

Almost anyone can make money in a bull (upward) market direction environment. In the late 1990's, people with no stock market knowledge would buy anything with the word “DOT COM” at the end of its name. They would buy the stock when the market opened, and at the end of the day sell the stock which resulted in a profit. They were geniuses and had the markets figured out – or so they thought.

Stocks can be bought to open a new position (going long), or they can be sold (selling short) to open a new position. The vast majority of people only invest from the long side, meaning they buy something, and hope the market moves higher. They are smoking “hopium” in the belief that their “research” has led them to the trade that will make their dreams come true.

The best economists and mathematicians, however, have proved that the markets are a random walk. There is zero long term predictability in the stock market. Even if you have figured out the rhythm of how the Apple Computer (AAPL) stock moves, you might be in too early or get out too late. Having a solid understanding of the correct (as there are more wrong ways than right) hedging methodology is critical to not only keeping your initial investment (and profits), but also sleeping soundly at night.

In our Practical Option Tactics class, we often use examples of collars and super collars (Platinum). A very remedial example was done in the past. We chose this one to use as an example as it is straight forward when broken down one trading date at a time.  We can show many other examples, but tend to do more cerebral and statistically balanced trades most of the time. The following position is a great starting point to understanding the process of hedging via the StratagemTrade.com method.

The process is straight forward on the surface and its understanding. We will go into the pieces and the process.

Part One: Buy shares of a stock

Part Three: Sell a call to pay for the put

Once you have s a stock that you hedge (bought a put and sold a call), you wait for the market to do something. The market will do one of three things:

If the stock vacillates around until the options expire, but makes not real move in one direction or the other, the call and put will both expire worthless. This results in no option gain or loss, but you did sleep well at night knowing you were protected. You simply repeat the process again.

Should the stock move higher, you will do some small adjustments. The stock probably is through the call strike. Here you will buy the call back so your stock is not taken away (assignment) and sell a new call out at a higher strike.

Since the stock moved higher, we can now buy new puts for protection at higher strikes. Assuming you bought the stock at $57 and bought the 55 strike puts, we know the puts will expire if the stock is above 55. Let’s say the stock ran up to $65 in one month. We can now go and buy the 60 strike put that is $5 higher than our original put purchase.

By owning the 60 put, we can sell the stock at $60 any time we want even if the stock moves to zero. And since we bought the stock fro $57, we now can NOT lose money.

There will be occasions when even the best stock falls. Should this happen near expiration, you simply sell the put out to get its profit (from the purchase price). Many investors will take the money from the sale of the puts and use it to buy more shares. Since the money taken in from the sale of the call offset the put cost, any money taken it is almost like a profit. It certainly offsets a loss you would have made on the stock had you not been hedged.

Every month, the investor keeps repeating the same process. This is easy to understand. There are many considerations to understand when picking the right hedge, but we will save that for later. We do not have enough time to go into things like:

When do you buy the hedge?

When do you sell the hedge?

What strike price call and put do you use?

What expiration month is best for this stock?

Do you play with the strikes throughout the month or leave it alone?

Below is an ordinary example Scott did with EBAY a couple of years ago. Again, this example was chose for its simplicity. There are a LOT of pieces shown here, so the trade may look complicated at first. Do NOT be intimidated by this. It is simple, straightforward and anyone can learn it. The key here is, “Do you want to learn it from someone who wrote a book with no instructions on the key variables (expiration, strike, open, close etc. considerations), or by a retired market-maker that traded HUGE volume – often 500 contracts at a time, many times a day?”

You will notice that this example is interesting in that we bought stock 11 times. We actually bought it more than 12 times since the example continued on longer than is being shown. We started with 900 shares at the end of September and by June we had almost 1200 (1196) shares.

These additional 296 shares were purchase

without putting more money into the position.

You heard that right. Every time we sold puts out, puts that didn't cost us anything (netted against the call) we used the proceeds to buy more shares. We increased the share size by 33% without adding more capital to the trading account. How do you think Warren Buffet keeps buying more companies without selling out old ones?

This happened many, many times, but 11 times (including the original purchase) with this name.

What is very interesting in this example is that on June 10th, the stock closed at 48.25. Every single time we purchased shares, the priced bought was higher than the price of the stock on June 19th. We lost money on every single purchase of stock to the tune of  -$7,394.85.

Below are the prices we traded the stock at.

How could we be proud of this position? We did the dumbest thing traders can do, which is add to a losing position. Right? Only a broker would tell a client (it is not his money after all) to go in and dollar cost average. That strategy hasn't worked for a lot of companies that eventually went out of business like Enron.

The DIFFERENCE is that we are trading an option position around this. We are not dollar cost averaging losses, but rather taking a position that is hedged and adjusting it. We are utilizing a ratchet wrench when everyone else is playing with knives. A ratchet wrench is a great tool because it only turns one way. Once you tighten something, it cannot go backwards. With the adjustment of the collar position, we keep locking in the stock from going backwards. We are NOT trying to catch a falling knife.

We can be very proud that we didn't take out a position and pray it would succeed. We took an intellectual and proactive stance to assist in the success. We took out chance.

Below are the call and put transactions we did over the course of less than 9 months. You will likely not understand the nuances, but they have been listed anyway. One may not understand quite yet what we did, but one can see that there must have been a systematic approach in place – and there was.

You will also notice that the bottom of the sheet shows the options made a net profit of almost $13,000. We would have been MUCH better off with a loss in the option positions as a likely stock profit would have been an even better example.

But the purpose of this example is NOT to show off how good we are. If we wanted to do somersaults and magic tricks, we could have picked trades like our Advanced Risk Reversals or Rolling Thunder trades that had zero money into the position, yet have the capability of making, say, $55,000.

The purpose is to illustrate how options have gotten a bad reputation. They are risky in the hands of someone inexperienced just like a chainsaw in a drunk's hands, which usually results in a trip to the emergency room. But options were designed as a risk management tool and that is what we are trying to show. 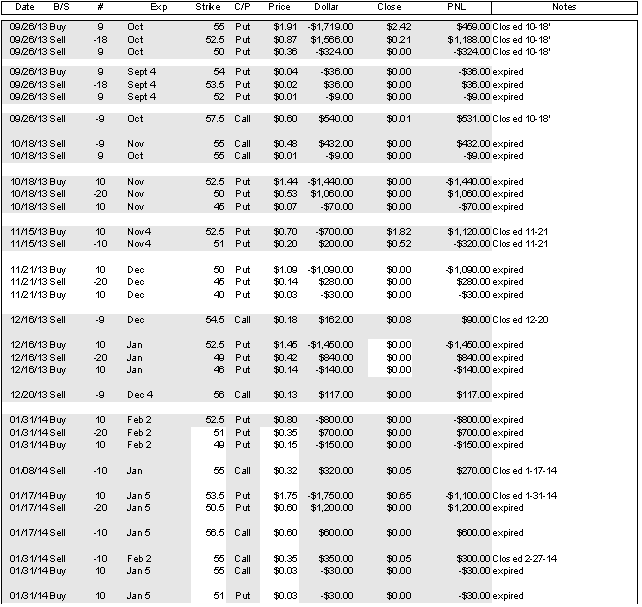 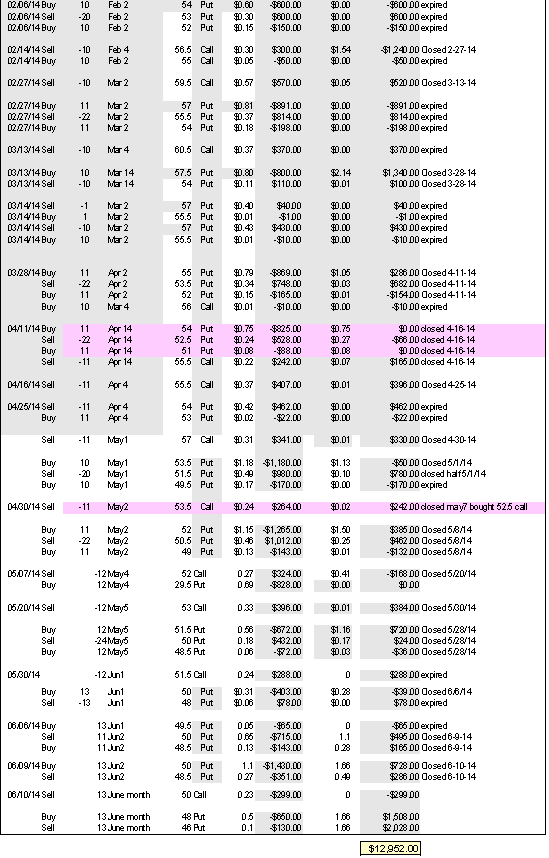 We in fact closed this position out in July after the stock got back to the original purchase price of $54.57. The profits were astronomical since we didn't lose on the stock. As a matter of fact, we ended up picking up even more shares along the way between June and July. Again, showing off is not the purpose.

Had we closed the position with the stock unchanged, it would not have demonstrated the power of hedging. The fact that the stock was LOWER than every share purchase price and we were still up $5,557.15 (-$7394.85 stock loss + $12,952 option profit) shows how a hedge can save someone from financial ruin.

Had the stock been purchased on margin, we would have put up half the money and doubled our returns to 17.6%.

Want to do something really pretty? Figure out how much stock we started with on our original $49,111 investment and how much we ended up with. Remember, we had 1196 shares trading at $48.25. We now have a stock position worth $57,707.

LESSON:
Hopefully this short study opens one’s eyes into the power of hedging. Many people are trading afraid for no reason. Knowing the position is safe is often worth more than even the additional profits. Without the hedge, we would have lost at 11.6%, but with the hedge, we made 17.6% (on margin). That is a 29.2% absolute swing in less than 9 months.

For more information on this and other strategies please contact us at: